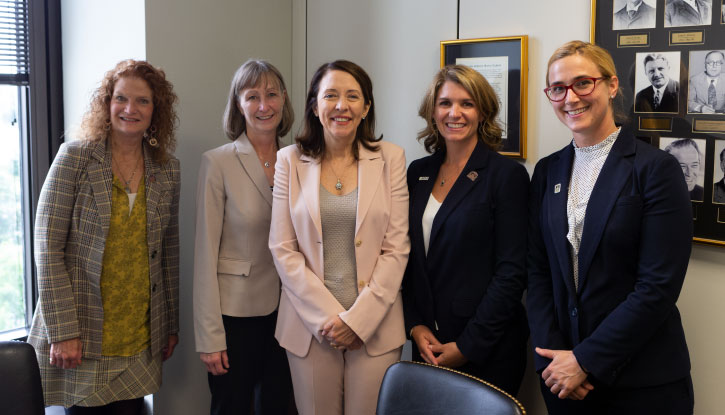 The semi-annual meeting of the AVMA House of Delegates occurred in conjunction with the AVMA Convention in Washington DC in August.  During the meeting, the House of Delegates discussed and voted on several resolutions and bylaws amendments to better address the needs of AVMA members.  Topics included updates to the model veterinary practice act, the judicious use of therapeutic antimicrobials, sexual harassment in the veterinary profession, pet health insurance, veterinary dentistry, veterinary research, and elections within the AVMA governance.

While in Washington DC, more than 170 veterinarians, primarily members of the AVMA House of Delegates and Board of Directors, spent an afternoon conducting meetings with Congressional offices.  The Washington delegation consisted of Drs. Saundra Willis (Washington Delegate and House Advisory Committee Chair), Diana Thomé (Washington Alternate Delegate), Debra Sellon (Alternate Delegate AAVC), and Elizabeth Hardy (Alternate Delegate AASRP).  During the afternoon on Capitol Hill, over 200 meetings took place between the volunteer leaders of the AVMA and elected officials and staff.  This marked the largest veterinary event of Capitol Hill ever conducted by the AVMA.

Several key pieces of legislation important to veterinarians were discussed during the meetings including improving access to rural veterinary care through the Veterinary Medicine Loan Repayment Enhancement Act, avoiding new prescription mandates from the so-called Fairness to Pet Owners Act, and the need to expand health care options for veterinarians through association health plans.  Specifically, the lawmakers were asked to support the Veterinary Medicine Loan Repayment Program Enhancement Act and the Association Health Plans Act of 2019, and to oppose prescription mandate legislation.

Elections were held for several key positions within the leadership of the AVMA.  Dr. Douglas Kratt was elected to the position of President-Elect.  Washington’s own Dr. Saundra Willis was elected the new House Advisory Committee Chair.  Finally, Dr. Rena Carlson was elected Chair of the AVMA Board of Directors.  Dr. Carlson is from Idaho and has served as the District XI Director representing AVMA members in Washington, Oregon, Idaho, Alaska, Montana, and Wyoming.  These leaders will be present at the upcoming Pacific Northwest Veterinary Conference in Tacoma, WA.  Please introduce yourself and get to know them.

It continues to be an honor and privilege to serve the veterinary community in Washington State.  Please don’t hesitate to reach out if you have any questions or concerns about the work of the AVMA, here in Washington and across the country.