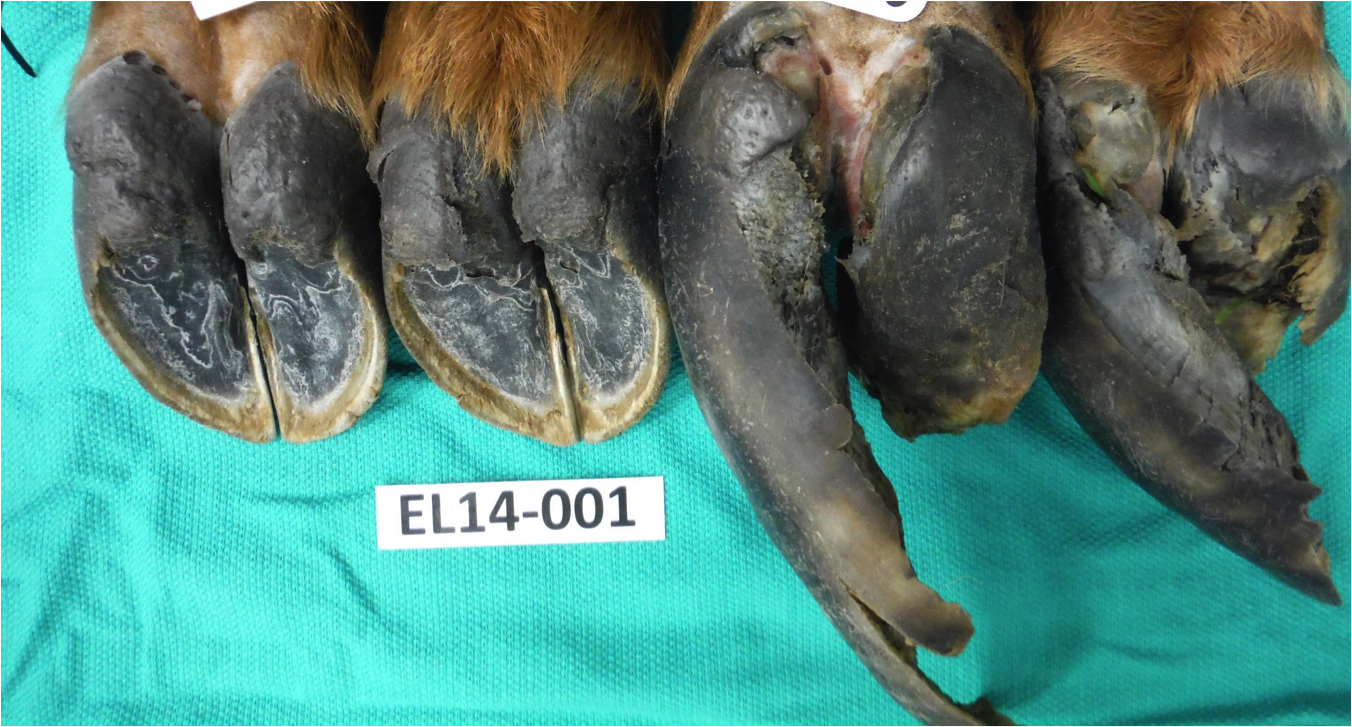 Since the mid-1990’s sporadic reports have been received from southwest Washington of free-ranging elk (Cervus elaphus) with lameness and severely deformed or missing hooves. These reports dramatically increased during the late winter and early spring of 2008. The geographic distribution of reports has continued to expand since then, and at this time is estimated to encompass a core area of approximately 10,500 km2 (4,000 mi2).

A diagnostic investigation to determine the cause was initiated in 2009. Radiography, routine bacteriology, virology, serology, and trace mineral analyses did not identify any significant underlying musculoskeletal or systemic disease (Han and Mansfield, 2014). Subsequent histopathology and silver staining of lesions from affected hooves demonstrated the presence of deeply invasive spirochetes accompanied by significant inflammation. PCR and DNA sequencing performed by the Washington Animal Disease Diagnostic Laboratory, the USDA National Animal Disease Center (NADC), and the University of Liverpool; IHC performed by the California Animal Health and Food Safety Laboratory; and culture and isolation performed by the USDA NADC and the University of Liverpool all identified these spirochetes as Treponema spp. known to be highly associated with two infectious hoof diseases in domestic animals: bovine digital dermatitis (DD) of cattle (Evans et al., 2009) and contagious ovine digital dermatitis (CODD) of sheep (Sayers, 2009).

Digital dermatitis (DD) emerged as a significant disease of cattle in the mid-1990s. According to a 2007 National Animal Health Monitoring System survey, DD was found to be the primary cause of lameness in dairy cows nationwide, with 70% of dairy operations reporting cases; and with DD accounting for 50% of all lameness cases in cows within study herds (USDA, 2009). Contagious ovine digital dermatitis is not commonly reported in the US, but has recently emerged as a major cause of lameness in sheep in the United Kingdom (Wassink et al., 2003). WhileTreponema spp. are consistently associated with DD lesions, especially in later stages, DD is considered to be a polybacterial disease. It is believed that unidentified bacteria or microbial consortia (Krull et al., 2014), as well as favorable environmental conditions are required to initiate the disease.

Clinically, the disease in elk closely resembles CODD of sheep, beginning with proliferative or ulcerative lesions at the coronary band; followed by under-running of the hoof horn; and ultimately sloughing of the hoof capsule. Elk appear to become infected at an early age, with possible lesions detected in calves as young as 3 months of age, obvious lesions at 8 months of age, and irreversible and chronic changes by 10 months of age (Fig. 1). Despite the apparently high prevalence of this disease in elk, veterinary practitioners in the local area have not reported in increase in infectious hoof disease in domestic livestock in these same regions.

This summer the Washington Department of Fish and Wildlife (WDFW) will initiate a survey with the help of trained “citizen scientists” in order to better define the prevalence and distribution of the disease. This coming winter, elk will be radio-collared in order to better understand elk movements and habitat use in the endemic area, as well the impacts of bacterial hoof disease on the survival and reproduction of affected animals. Finally, the WDFW is currently consulting with veterinary researchers at the USDA NADC, Colorado State University, and elsewhere about conducting live animal studies to gain insight into the progression of the disease in individual elk and within a herd, disease transmission, development of immunity, and survival and persistence of treponemes in the environment.