Alongside many stellar lectures from thirty-three speakers in both small and large animal medicine, some of the topics at this year’s conference attracted nearly standing-room-only crowds. A few of the subjects which proved especially popular over the weekend included Marijuana as a Therapy and Marijuana Toxicity; multiple lectures in both small and large animal behavior; a day-long series of presentations in Communications led by Dr. Richard DeBowes; and updates in technology and navigating social media. In between sessions, attendees milled around amongst nearly sixty exhibitor booths at the trade show.

It was nearly impossible to leave the conference empty-handed. Exhibitors at the trade show offered eye-catching tote bags, free samples and information on exciting new products. Attendees who placed an order with a vendor onsite earned a chance to win a complimentary voucher towards next year’s conference. Participants who completed the exhibitor scavenger hunt were placed in a drawing to win prizes including a new iPad Air. Still others could bid their way to a gourmet gift basket full of tempting wines, regional delicacies, cookbooks, and more at the silent auction – all for a good cause, the WSVMA Past Presidents’ Scholarship Fund. A shining few even received recognition for their dedication to the veterinary community at the Awards Banquet. If nothing else, at the end of the weekend conference-goers headed home with a few new tricks up their sleeves and a few more days spent in the company of friends and colleagues old and new. We thank everyone who joined us, and we can’t wait to see you again next year!

Saturday evening the Exhibit Hall transformed into a festive venue for the annual WSVMA Awards Banquet. In accordance with this year’s theme, many guests donned their western duds before tucking in to a barbecue dinner with all the fixings. Current WSVMA President Dr. Jocelyn Woodd graced the podium to lead the celebration.

Anyone who has met Dr. Richard DeBowes will not be surprised that he was awarded Veterinarian of the Year. As a principal figure in the foundation of the Cougar Orientation Leadership Experience for incoming freshmen at the Washington State University College of Veterinary Medicine, which has since gone global in the form of the AVMA Veterinary Leadership Experience, Dr. DeBowes has introduced the concept of servant leadership into the veterinary profession as a standard rather than a suggestion. Those who know Dr. DeBowes will not hesitate to call him teacher, colleague, and friend; and yet, the titles of husband and father are the ones that bring him the most pride.

In a nod to the many new frontiers of communication, Suzanne Kurtz, PhD, graciously accepted the Distinguished Achievement Award long distance via Skype. This is perhaps fitting for a woman whose pioneering work in the field of clinical communication in human medicine has spanned not only decades but also the globe. Dr. Kurtz generously parlayed her expertise into the veterinary field and has bettered the lives of countless veterinarians and veterinary students as both a clinical professor and Director of the Clinical Communications Program at Washington State University College of Veterinary Medicine. “Distinguished” hardly begins to describe the many amazing achievements for which Dr. Kurtz deserves to be recognized.

Several awards presented Saturday evening shared a common theme, that of communication and its importance to the veterinary profession. Dr. Julie Cary humbly accepted the WSU Faculty of the Year Award for her ardent dedication to the veterinary students at the Washington State University College of Veterinary Medicine. Not only a well-respected equine surgeon and criticalist, Dr. Cary is a clinical associate professor within the college and co-director of the ground-breaking Clinical Communications Program. In addition, Dr. Cary holds a prestigious postgraduate credential in teaching competency from the University of Dundee and serves as the founding administrator of the invaluable Clinical Simulation Center. Dr. Cary’s tireless devotion ensures her students’ success.

An emotional acceptance followed as the Distinguished Veterinary Staff Award was given to Christina “Rae” Thompson, LVT. Ms. Thompson, a technician and assistant hospital manager at VCA Central Kitsap Animal Hospital in Poulsbo, recently received national recognition by the VCA organization over thousands of other candidates to participate in a new Technician Development Group. In her daily work she routinely goes above and beyond, earning her dozens of glowing comments from her co-workers which were read aloud during her heartfelt nomination. On accepting her award, Ms. Thompson took a moment to remind us all that a few words of gratitude go a long way when working with hospital support staff.

The Humane Animal Welfare Award was bestowed on Judith Piper, founder and Executive Director of Old Dog Haven. With the help of her husband, Lee, and a network of volunteers and foster families throughout western Washington, Judith finds both temporary and Final Refuge homes for senior dogs who would otherwise end up in shelters. Although Ms. Piper was unable to accept this award in person, her presence was felt via a deeply moving video montage featuring some of the pets who have benefited from her care. Since 2007, Judith has helped to give over one thousand senior dogs a chance to live out their golden years in a loving home.

It never ceases to amaze how many shining stars we meet in our profession every day. Let us remember to take a few minutes to appreciate those who make our lives a little better and brighter – and be sure to keep them in mind for next year’s nominations. 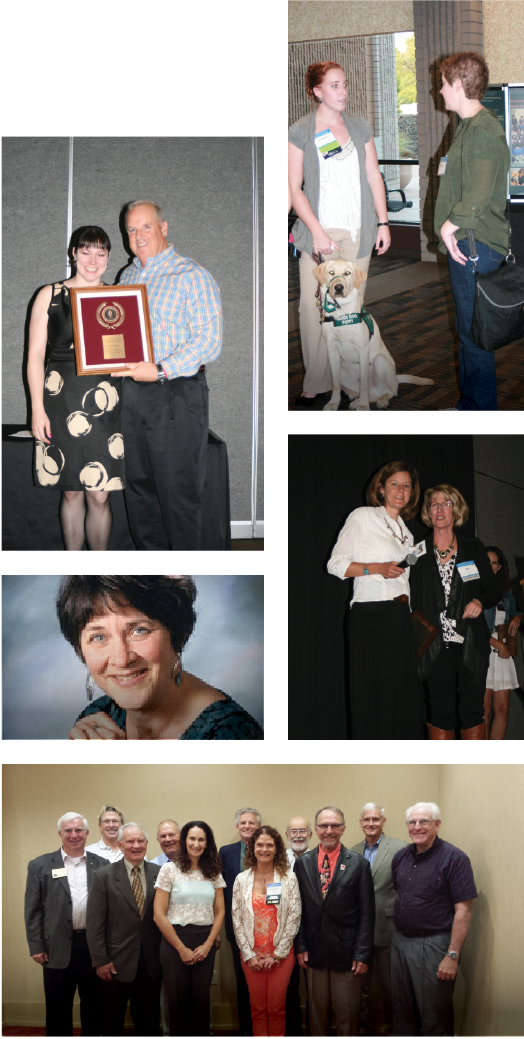 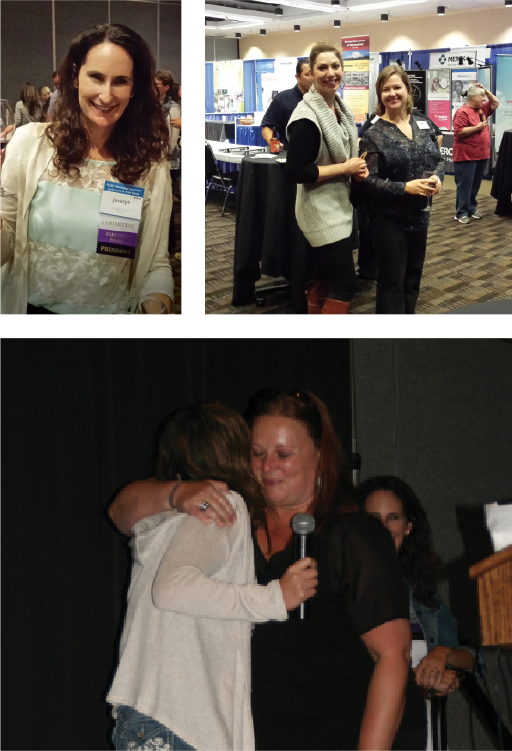 On Saturday morning, a room-full of conference-goers squeezed in shoulder-to-shoulder to listen to a pair of lectures on livestock handling and behavior presented by Dr. Temple Grandin. Her presentations are inspiring for many reasons, not least of which is the fact that a mother’s vigilance and hours of intensive speech therapy during childhood may be the only reason that she is able to speak at all. Dr. Grandin’s mild autism has shaped her view of the world and allowed her to understand animal emotions and behavior in a way few others do. As members of the veterinary profession, we would be remiss to pass up any opportunity to learn from her experience.

Dr. Grandin began the morning with a lecture on keeping livestock calm during handling. Animal emotions are real, and any fearful experiences can have a measurable impact on animal welfare and productivity. Lacking a verbal thought process, animals form memories based on sensory experiences such as a visual or auditory stimulus perceived at the same time as a painful or aversive one. Any sensory cues related to pain will induce fear with subsequent exposure. Conversely, conditioning an animal to equate certain objects or sounds with a food reward, or decreasing potential environmental stressors, can actually improve such parameters as weight gain, reproduction, and overall health.

When handling livestock, Dr. Grandin advised her audience, “Be observant.” Handlers should be able to utilize body language to “read” their animals in stressful situations. The unique sensory adaptations of farm animals influence the way they respond to their environments in a predictable way. Farm animals are known to possess dichromatic vision – as opposed to our trichromatic vision – which makes them more susceptible to fear of shadows and sudden movements. They are also highly sensitive to certain noises, especially high-pitched sounds and yelling or whistling from human handlers. Sudden loud or startling noises can cause stress, although continuous background noises, machinery, or noises used in conditioning such as a horn calling cattle in to feed can be used without inducing fear.

Based on these keen observations, Dr. Grandin has put much effort into designing equipment for livestock handling that reduces stress by decreasing visual and auditory stimuli. Dr. Grandin recommends that ramps and chutes be constructed with solid walls – on at least one, if not both sides – to block distractions such as nearby handlers, trucks, shadows or moving chains. Similarly, diffuse lighting can be used to reduce dark corners or shadows in an animal’s path or in a crowded pen. At this time Dr. Grandin’s designs are being utilized to process half the cattle in the U.S. and Canadian beef industries alone.

Dr. Grandin followed up with a second session on the role of animal welfare in livestock management. She is a devout believer that “you manage what you measure.” Admittedly it can be difficult to quantify a “proper” way to handle an animal, but a general rule will work for any situation. In a moment of levity between sessions, she quipped, “If this will look bad on YouTube, don’t do it.” She went on to explain that two of the most critical mistakes a livestock manager can make are to understaff a facility or to overwork the animal handlers. For a more precise and evidence-based explanation on proper animal handling techniques, Dr. Grandin offers resources on her website, www.grandin.com.

Later that evening during the Awards Banquet, Dr. Grandin expanded on the idea that animal emotion plays an integral role in understanding behavior and handling of all animals. She gave several insightful suggestions for reducing fearful encounters in both small and large animal medicine. For instance, small animal clinicians should instruct dog owners to bring a bathmat from home to prevent slipping on a smooth floor or exam table. Providing a familiar article from the dog’s daily environment will also help keep it calm. Similarly, a horse who is fearful of enclosed spaces or has never been introduced to a barn prior to a veterinary visit should be examined outdoors to reduce stress. A calm animal will be much easier to handle, and in the long run such measures will actually increase efficiency. Dr. Grandin closed the evening with a Q & A session, as well as hinting at the intriguing role that genetics play in predisposing specific breeds to certain emotional responses, and the dangers of overbreeding for certain traits.

For many who attended the 2014 Pacific Northwest Veterinary Conference, the opportunity to see and hear Dr. Temple Grandin speak – and even to meet her in person – stands out as a highlight of the weekend. Her work serves as a reminder that something as daunting as childhood autism can turn out to be an opportunity to view a situation from a new perspective, leading to innovations we could never otherwise foresee.

— Angela Lehman is a small animal practitioner in Spokane. She can be reached at [email protected] 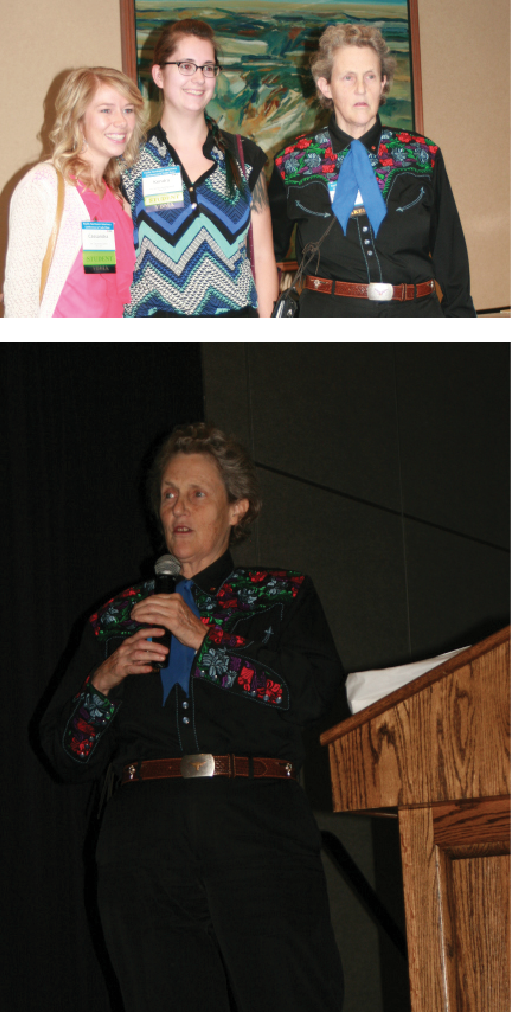